First things first: you can get the code from git by running:

For over 20 years, network managers have grudgingly accepted the suboptimal nature of closed, proprietary networking architectures, which are inherently non-scalable, inflexible and administratively cumbersome. Traditional networking devices generally have proprietary management systems, implement proprietary protocols, and lack reliable APIs for external programmability or automation. While the enterprise compute and storage sectors have experienced dramatically improved flexibility and scalability over recent years, the networking industry has been slow to evolve and, therefore, is perceived by many enterprise customers as the primary inhibitor to agility and innovation.

The solution is open software-defined networking (Open SDN) — the use of standards-based protocols and open interfaces to abstract the network control plane from the data plane. Open SDN enables unified control and programmability across a network of heterogeneous physical and virtual networking devices. There is a groundswell of support for SDN initiatives among some of the largest technology customers in the world, leading academic institutions, and forward-looking networking vendors. Broad support for the non-profit industry consortium, the Open Networking Foundation (ONF), serves as a strong testament to the disruptive potential of SDN.

The ONF serves as the independent steward of the industry’s first standard protocol for a common network control plane abstraction, called OpenFlow, which has now been widely adopted throughout the networking industry. Growing industry momentum and the adoption of these emerging standards have catalyzed the movement toward software-defined networking.

The Open SDN architecture is built around the OSCP controller, which provides a common data model and policy abstraction for all the network fabric elements. These universal network abstractions and the OVP leverage industry standards and open APIs to provide maximum deployment flexibility. The OVP also enables a broad range of application support, including data center network virtualization.

Open SDN is based on a three-tier architecture of virtual devices. The Open SDN architecture unlocks the latent potential of physical networks and enables network managers to meet the business needs that have emerged recently:

Open APIs refer to the software interfaces between the software modules of the controller platform and the SDN applications running atop the network platform. The Open SDN architecture employs Northbound APIs, which expose the universal network abstraction data models and functionality within the controller, for use by network applications. These interfaces are published and open to customers, partners, and the open source community for development. The Open APIs enable maximum utility of the Open SDN architecture through the ecosystem of customers and partners developing on the platform.

Click here to go to the Northbound API Reference

The OpenDaylight Virtualization Platform utilizes standards-based connectivity for the Southbound Protocols, which define the control communications between the controller platform and data plane devices, including physical and virtual switches. Furthermore, the Open SDN architecture is flexible and can leverage other protocols in addition to Openflow. Support for a wide range of physical and virtual switches ensure that customers have maximum choice and flexibility for designing and deploying their software-defined network.

A Cluster of Controller Nodes 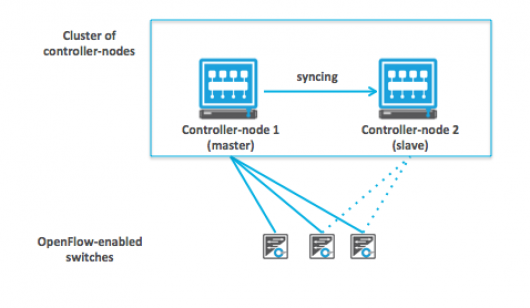 OpenFlow-enabled switches, whether physical switches or hypervisor/virtual switches, are configured to connect to the OSCP controller-nodes. Once this is done, the OVP uses OpenFlow to program specific instructions dynamically into the switches' forwarding tables to implement the application-specific forwarding behavior. Note that some switches can connect to multiple controller-nodes simultaneously while some connect to them one at a time. When switches connect to an OpenFlow controller, they identify themselves with a unique "datapath-id" or DPID.

Applications can be enabled to run on top of the OVP and its infrastructure and APIs. In this release, one application is available, the OpenDaylight Network Virtualization (ONV) application. The applications leverage common management infrastructure such as login/security, configuration files, logging and debugging utilities. The applications also use the underlying OpenFlow libraries provided by OVP to control the connected OpenFlow-enabled switches by sending "flow-mods" or "flow-entries" down to the tables inside the switches.

These flow-mods in the switch tables are comprised of three parts: